Congrat’s team we’ve made it through another season!

This year the Year 3s were split into two groups with 14 players making up the “Blue” team.  Training was conducted on Thursday afternoons.

2016 saw the boys step up from Auskick with several ‘firsts’ for the year.  These included; regularly playing home and away matches against the other footy clubs in the East Fremantle District, using the size 2 balls for the first time and learning and applying the wrap tackle.

Throughout the season we focused on improving ball skills (kicks, handballs & marks), being first to the ball, running into space, teamwork, tackling, positions on the field, and most of all having some fun and mateship.

From the very start of the season it was great to watch the boys listen, learn, and try new things.  I’m sure everyone will agree that all of the boys have improved, and finished the year playing with great teamwork. The handball and run out of defence has been a highlight, along with the general uplift in both skill level and confidence from the boys.

To the parents; thanks, obviously things just don’t happen without people getting involved, so again thanks for bringing the boys down to each training session and game day, washing the jumpers, providing oranges, goal umpiring, timekeeping, and helping out at training.

A special thanks to Nat Shreedhar (Team Manager) whose wise words and efficient admin throughout the year were a great calming influence.  To Dan and Kel, thanks guys for helping out at training.

Finally it’s been a joy to coach and watch some spectacular displays of team footy from the boys.  Yes lads we definitely surprised a few teams and a few parents too!, you should all be very proud.

Well done and congratulations to all the players, you have been a fantastic bunch to coach and I hope to see you all back next year.

This year saw a new mix of players come together to represent the mighty Year 3 Red team. We were lucky enough to pick up some players from surrounding clubs, some brand new players to the sport and others who had returned to the club after successful Auskick seasons. With the new group coming together it looked like it might take a few weeks to gel, but the boys came together really well and from early on in the season we had a well-oiled machine up and running.

The team was lucky enough to have a real wealth of talent and each player complimented the next. While players rotated through every position, they really started to fine tune their skills and natural ability to contribute to the team.  Jacob Hall had an outstanding season and so often used his run and carry through the midfield to find targets up forward; where Austin Lee, Oakley Bourne and Lucas Baldacchino proved consistent goal kickers throughout the season and made sure the team was well rewarded with plenty of goals to celebrate. First use of the ball is often so important in footy and Riley Parker’s rucking skills often provided great opportunities for Jay Harrison, Jamie Gibbs and Hudson Spinks to use their skills, win the contested ball and move it forward quickly. Thomas Cordina, Ben Della-Marta and Xabi Bell all showed great toughness around the ball no matter what position they were in; tackling opposition and putting their head down to win a hard ball. Defence is the best form of attack and so many times this year it was Jacob Geaney, Hunter Cairns and Jacob Munro who would put an end to the opposition thrusts with goal saving marks, long kicking and the ability to clear the ball to safety. Footy is a tough game, no matter what age or level you play at, and to put your hand up to run out for the first time, against players with years of experience behind them, is brave and commendable. We were lucky enough to have three players of this calibre with us this season. Josh McNamara-Pitt, Josh Firth and Chris Xanthis didn’t take a step back at training or on game day and made their coach and team mates proud this year with their contributions. Each got better as the season went on and I look forward to what 2017 brings.

All in all, the team had some real highlights this year and always managed to do it in the right spirit. It was a fun year and very easy to coach such a great group of boys. Huge thanks to Trish Spinks our diligent team manager, Meegan Bourne our resident medico, Layton Bourne our fantastic assistant coach and all the parents/loved ones who helped out during the year and made it a great season for the boys.

What a fantastic season!! We have watched this group grow and develop over the season into a formidable team willing to take on taller teams with relentless energy and enthusiasm. The kids all adapted quickly to the transition from Auskick style of play into junior football and relished in the opportunities of open play footy.
We entered the season with 16 aspiring young footballers, a simple game plan and have taken a huge step forward in understanding how the game is played, how to get the most enjoyment out of each game and how to work together as a team to achieve success.

The latter half of the season has seen significant improvement from all kids who have been putting on some spectacular displays of team footy. This rapid advancement has enabled us to expand our game plan and challenge ourselves to improve each week. Well done and congratulations to all the players, you have been a fantastic bunch to coach and we hope to see you all back next year.
I hope the parents have enjoyed watching the kids grow and develop over the season as much as I have and would like to thank you all for your support, assistance at training and game days and most importantly, bringing your kids to footy each and every week. Thank you. I believe the parents have bragging rights from the kids vs parents scratch match, albeit by a couple of points on the siren.

A special mention to Ryan Budge, our team photographer. You have taken some magnificent photos over the season and I would like to thank you for capturing this and sharing with us.
Thank you Blair Marley, our assistant coach. You have been a great help throughout the season from taking small groups at training, warm ups before the game, time keeping, changing the board, and helping set up and pack away. I know the kids have enjoyed having you there every week. Your focus and commitment to the team was much appreciated by both Craig and I and we hope you have enjoyed the experience and learnt more about footy on and off the field.

A big thanks to Andrea and Ryan Manason, our team managers. You both have done a fantastic job in your first season and I hope you have enjoyed the journey so far. Nothing was ever too much trouble and I hope to see you both back again next year, particularly Ryan after setting the dress standard for the kids vs parents match!!

Finally, a massive thanks to Coach Craig Nelson. Your support, ideas and enthusiasm have been fantastic this year. Without your support, the achievements our kids made this year would not have been possible. I have enjoyed coaching with you and look forward to the next season and beyond standing beside you. Thank you.

I hope everyone involved with the Mighty Super 8 Blue team have enjoyed the season and I hope to see you all again next year.

2015 was a big year for the Super 8s. Two teams were fielded this year and myself along with assistant coach Mike Allen had the privilege of coaching the White team.

There were a number of firsts this year with the boys playing weekly home and away matches against the other footy clubs in the East Fremantle district, using the size 2 ball for the first time and the wrap around tackle. Both teams trained on Wednesday afternoons for an hour with the boys honing their footy skills and game knowledge.

The home and away season saw us travelling to a number of different venues and with the quality of the games getting better and better as the season progressed, the uplift in both skill level and confidence from the boys was a joy to watch. We also had a wonderful parent group who were loud and proud with much encouragement from the sidelines while always ensuring the opposition players got their fair share of praise for great play. Parents taking the lead with sportsmanship like this was great to see and sent a great message to the kids.

Special Thank you must go out to Andrew Auret – team manager, Marty Savage – goal umpire and Brad Beitmamas – enthusiasm coach, and to all the parents for ensuring their kids made it to training and for the encouragement and support they provided to the boys on game day.

A great season was had by all and we look forward to all the boys returning for a big 2016. 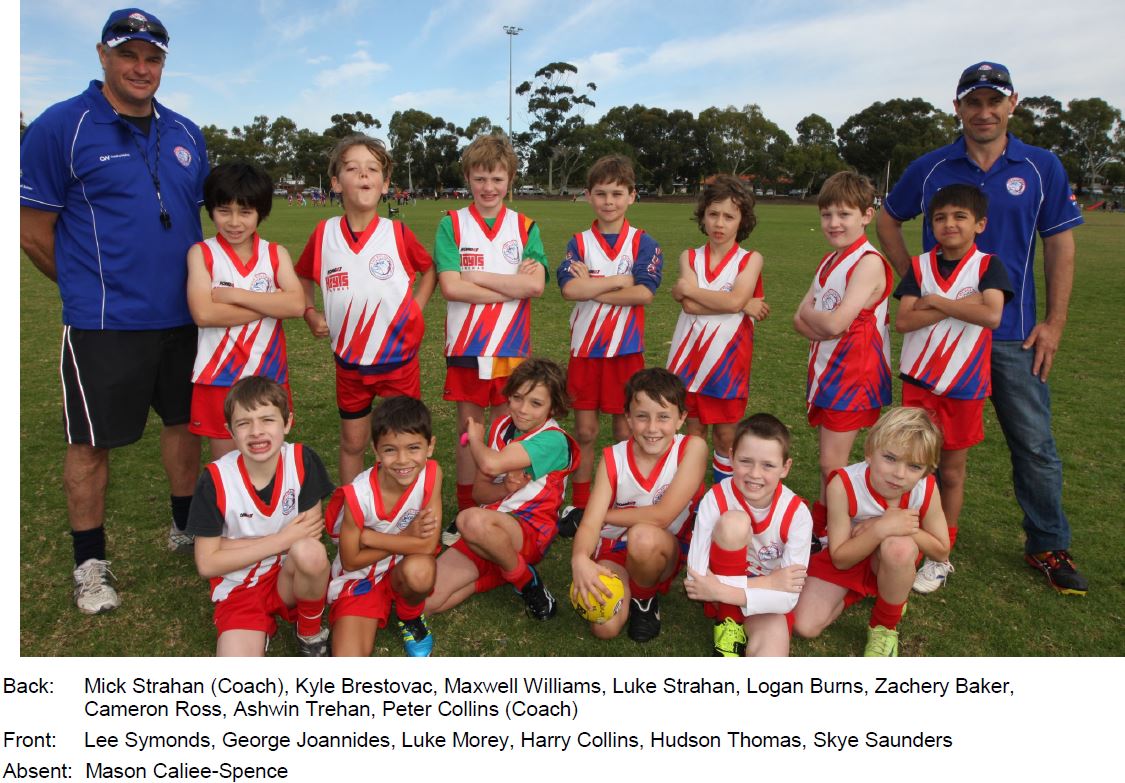 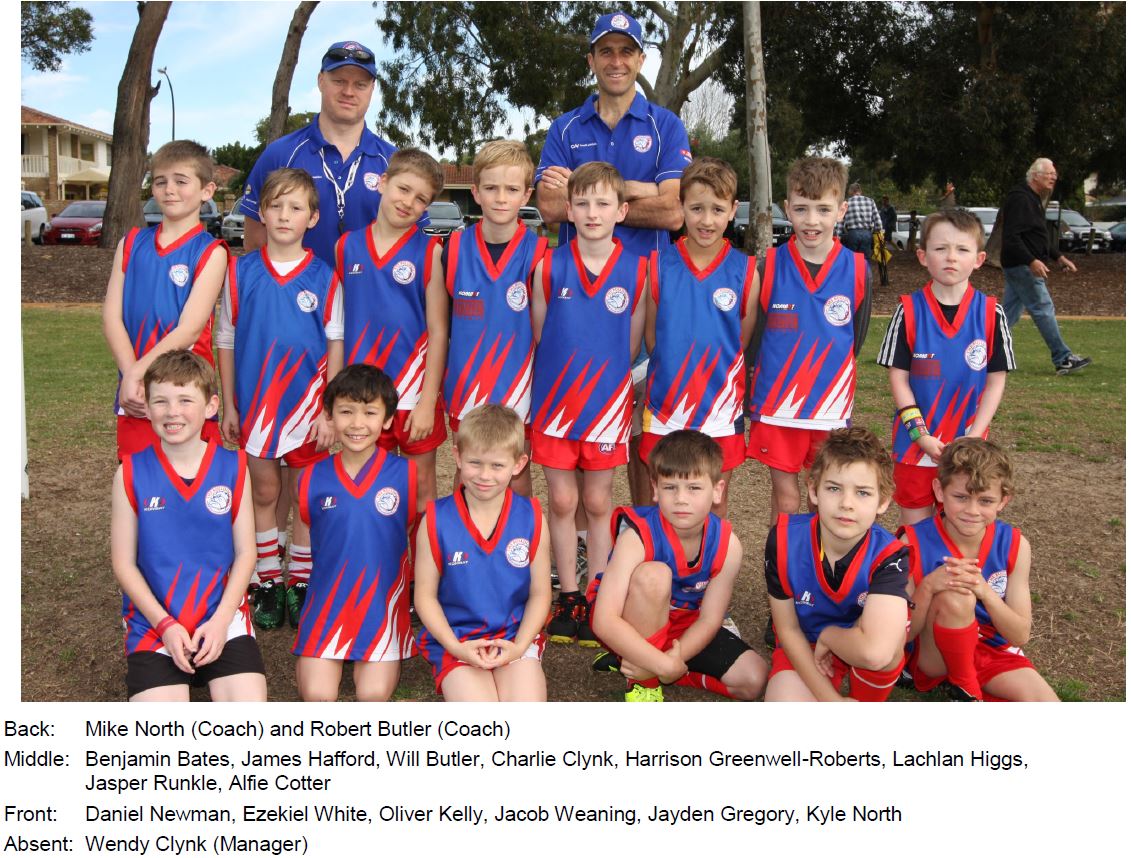 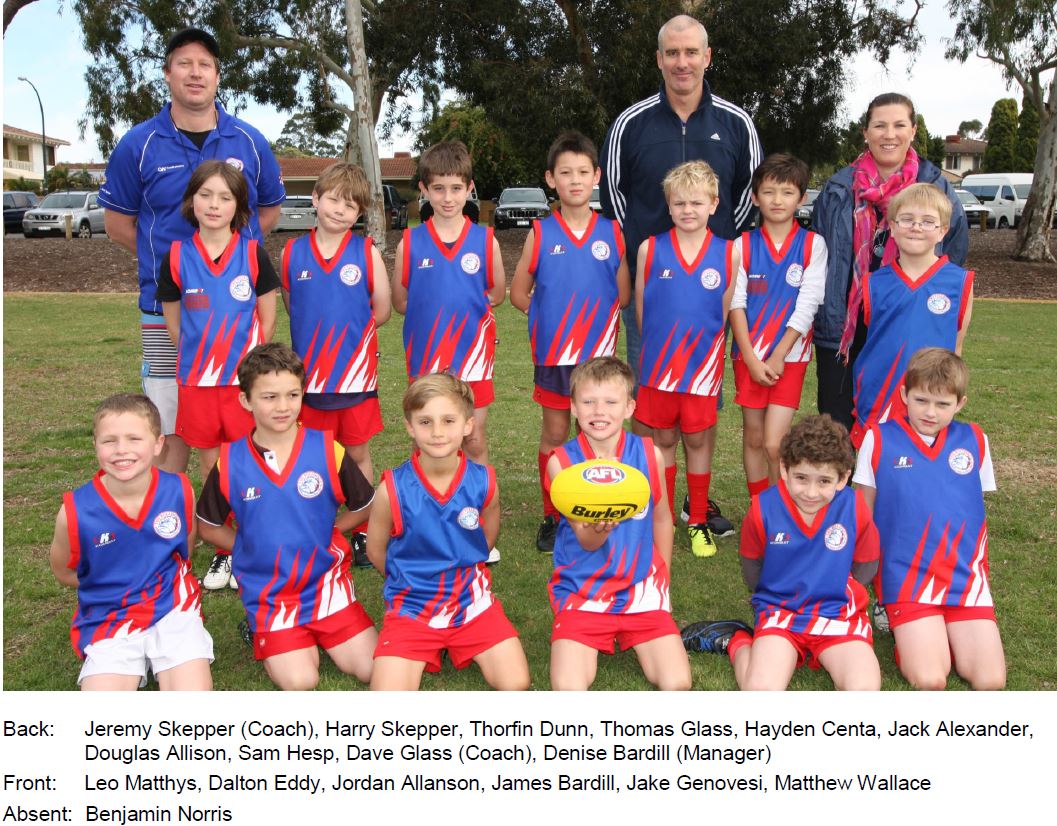 We have again had the pleasure of coaching the year 3 s for the 2014 season.

Thankfully after a number of years working on our skills and playing scratch matches, the boys finally had an opportunity to play against opposition teams from the East Fremantle district.

With 44 boys enrolled, we split the large group into 3 teams, being Booragoon 1 coached by Mick Strahan and Pete Collins, Booragoon 2 coached by Rob Butler and Mike North and Booragoon 3 coached by Dave Glass and Jeremy Skepper.

Over the course of the year we played games against opposition teams home and away, and on weekends where we were not fixtured to play games, we held training sessions and scratch matches amongst ourselves. We also introduced weekly training sessions on a Wednesday night which ran for an hour and gave us quality time to work on all our footy skills.

The boys have been an absolute pleasure to coach and it s fair to say comparing our first game to how we finished in the Willetton carnival, their improvement has been outstanding.

The attributes which stood out this year were teamwork, competitiveness, mateship and skill improvement. Overall we had 15 new players, who have slotted in extremely well, we are hoping the group stay together throughout their junior years and enjoy the rewards of playing a fantastic team sport.

To all the parents a huge thank you for bringing the kids down each training session and game day, washing the jumpers, providing oranges, goal umpiring, timekeeping, and helping out at training.

Thanks to Ali Wallace for providing mouthguards to players and also James Allison for providing goal umpire flags, these contributions were appreciated.

Special thanks to Denise Bardill and Wendy Clynk who both volunteered as managers and assisted throughout the year with rosters, correspondence and overall assistance .very much appreciated.

Overall it has been a very successful season and also very rewarding as a coach to see the player s progress.

We hope to see you all again next year. Go the Bulldogs!!!
Mick Strahan, Rob Butler and Dave Glass (Coaches)