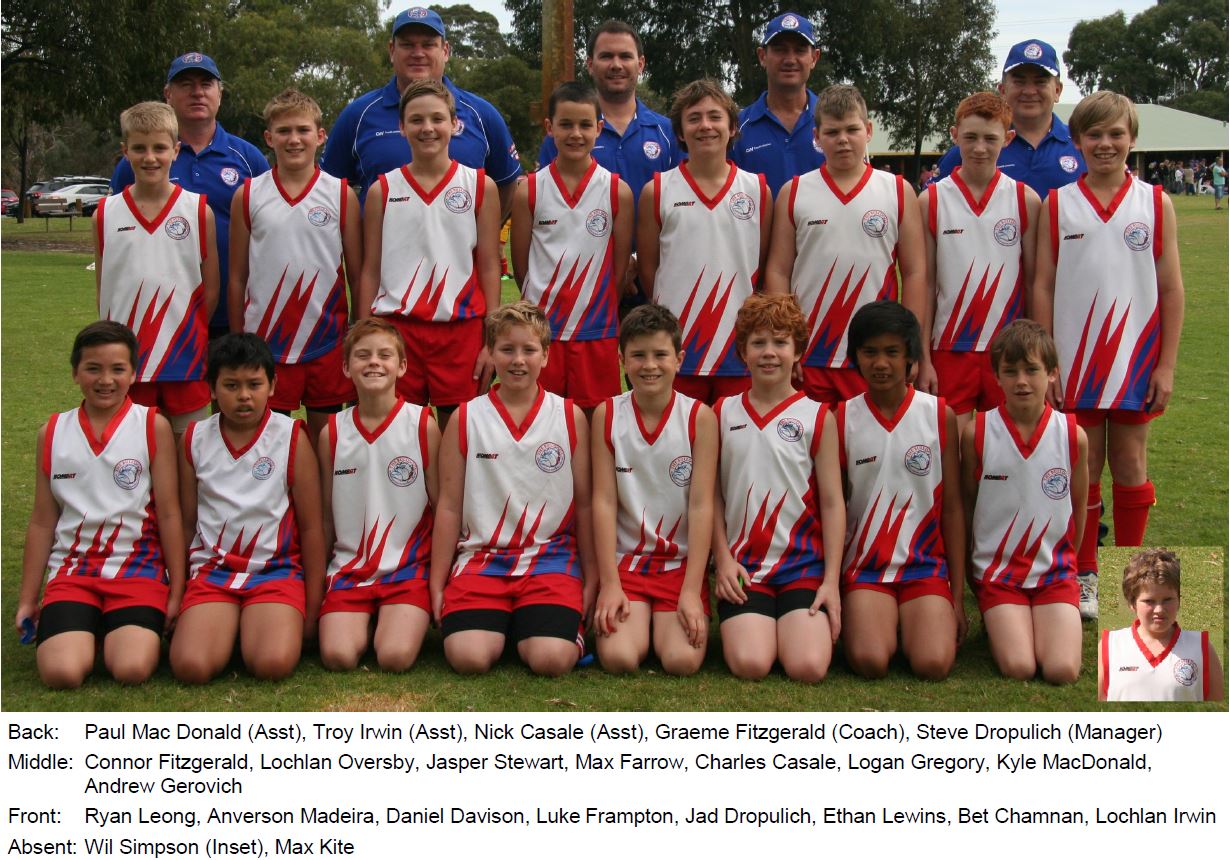 2014 was a great year for the Year 6 Whites. This was the year the boys began to really enjoy each other s company, work hard together and develop a strong sense of the team .

We started the year slowly, facing Winnacot in our first match and got a real lesson in tackling. The coaching and parent group were left shaking our heads and wondering about a long season ahead.

Yet the second week came up against Attadale and the boys played like legends, embracing the full tackle rule and competed hard. We had a great day.

Over the season the team developed a reputation as a hard tackling group and the boys began to gel as a team, working hard for each other.
The boys had lots of fun at training and enjoyed their nicknames being added to the game board midseason.

The season culminated in the Year 6 carnival with all kids playing in four games through the morning and really enjoying themselves.

A big thank you to our tackling specialist Troy “Tank” Irwin and our board man Nick “Up There” Casale, and especially Paul “Macca” McDonald for being at every training to support the boys. Paul was also the club line marking man and our team runner on game days. He is the ultimate Clubman.

Well done to Steve Dropulich for being a terrific manager-always calm and organised. He was instrumental in running the Year 6 carnival and constantly reminding me it is as it is Fitz . Thanks to Helen Davison and Tiffany Oversby for being our 1st Aiders, for Wil and Kristy Simpson for bringing oranges all season and all other parents for their hard work setting up, cleaning up, running the canteen, goal keeping, time keeping, etc.

Lots of our kids got the opportunity to play with the Year 6 Reds team to help out and I want to thank Leigh Wardell-Johnson and Heidi Cook from the Reds for helping us out with players through much of
the season when we were short on numbers. It was great to have some of the Reds participate in the carnival and be part of the action. 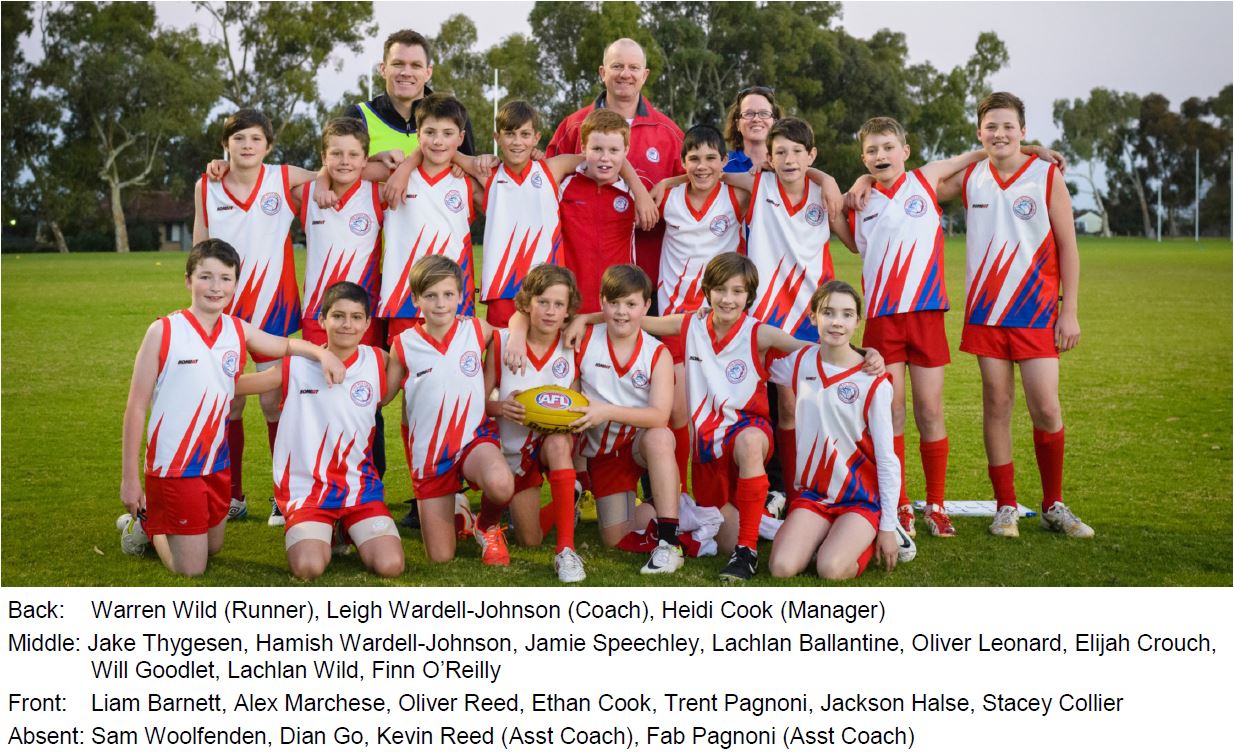 We started our season under 3 main playing philosophies, maximum participation, maximum respect and maximum fun. Our players embraced these philosophies and took great steps forward this season in not only becoming better footballers but also maturing into fine young people.

Our skill level needed to improve if we wanted to move the ball the way we wanted. Consequently, our training focus shifted to improving specific skill areas such as kicking and marking. It was great to see as the season progressed that the skills improved across the board and we were able to play some tidy end to end footy.

One of the most pleasing aspects of our season was our ability to stay very competitive in almost all games. In particular, I was really pleased with our tackling pressure and on more than one occasion the opposition coach remarked that we were the best tackling side they had played against.

Thanks to the players for your commitment during the season.

A footy season wouldn t be possible without the enormous efforts of several people involved in running the team.

To my able assistant coaches Kevin and Fab, a big thank you for your support both at training and on match days.

To our team runner Warren Wild for his passion and energy in motivating the players every week.

Our medic Michael Crouch who has supported us from early days of Auskick through to now.

To Christine who for the past 20 years has supported me in various ways from a footy girlfriend, wife and now mum. Thanks Chris.

Last but not least our team manager Heidi. Like many of you, Heidi has supported us since Pre-Primary of Auskick. Her efforts over the past three seasons as team manager have been truly outstanding. Thanks Heidi.

Finally, to all the parents who waved a flag, cooked a snagger, deep fried some chips or played timekeeper, my sincere thanks to all of you for being part of our season and I look forward to seeing you all back down the club next year.

Great story about Stacey Collier from the Booragoon Bulldogs.

STACEY Collier does not shirk from a contest on the football field.

The Booragoon Bulldogs Junior Football Club player is not afraid to mix it with the boys and loves nothing more than winning a possession through congestion.

Stacey (11) has been playing Australian rules for the past five years and hopes to climb up the ranks to the WA Youth Girls 16s team in 2016.

It’s been a fantastic 2011 footy season with the year 6 blues, both on and off the field.

My philosophy this year was to concentrate on the 1 percent items – The talking, shepherding, supporting the ball carrier, keeping your feet in a contest at all times and of course teaching and encouraging some of best tackling you would see in any grade of footy.

This year there were some great contests which certainly tested the skills and courage of all the lads. Without a doubt we are looking at some extremely talented young players that will certainly be future rising stars.

Natural leaders have emerged by leading by example giving support and guidance to the developing players,

Team effort was the key to the successful 10 win 5 loss season. Best of all, we finished the year by emerging champions of the lightning carnival with a fantastic 4 wins.

Many thanks to Alan Fereday who’s tireless work made my job so much easier,

But most of all many thanks to all my super stars for a great and exciting season. I had lots of fun and hope you did too.

It’s been another great season of football for the boys with a big milestone reached for a few of the players.  Darcy Roden and Jack Cameron were the first to reach 50 games on the same day, followed a few weeks later by Riley King and then Tom Egger and Khai Heah the following week.

The core of the group have been together since Auskick and this season welcomed in Tom White, Montelle Matatahi-Bandy, Josh Harrison and James Hosking, all of whom have been great acquisitions.

All the boys have shown continued improvement and have handled all positions on the field very well with everyone being a goal scorer by mid-season.  The rotations have given the boys a good try in all positions.  Some have shown that they are very well suited to some positions. Campbell Marley has developed into a gutsy backman.  Riley King has stepped up and can bulldoze the ball forward in packs with his big size.  Hayden King is taking fantastic overhead marks and likes to add firepower up forward. Shaun Miller, Kyle Birch, Khai Heah,  Montelle Matatahi-Bandy, Darcy Roden and Tom Egger are all classy players with great ability. Ben Lieschke, Josh Rule, Harry Reid, Tom White, James Hosking and Daniel Withers all put in a big effort every week to help create opportunities.  Josh Harrison is a real speedster who can open up a game with his great gift.  Max Scott and Jack Cameron, our smallest players, don’t hold back to get in and under to win the ball.  Abbey Varney rejoined mid season and is once again showing up some of the boys with her great skill and courage.

The big Friday night Bulldog Derby was something all players loved despite the final score and they look forward to playing under lights again.

Sharyn Rule has once again been the team manager and a big thank you on a magnificent job.  We are indeed blessed to have her in that capacity.

Lindsay Marley has been terrific as assistant coach and his input on game day and at training has been extremely valuable.  Justin Varney has also been much appreciated in the latter part of the season with his technical know-how and ideas.

Many thanks also to all the parents for doing the many jobs that make a footy game memorable and fun for the kids, it just doesn’t happen without their support and cheers.

Finally, I hope to see all the team back again next year to go harder, higher and stronger and with as much enjoyment as this year.

The carnival will be held at Booragoon JFC home ground Karoonda Reserve, Booragoon, commencing at 8.30am.  Please ensure that your team is at the ground at least 30 minutes before their first game.  Please also ensure that a team official reports to the BJFC Clubrooms to let organisers know you have arrived and submit a Team Sheet.

Important information for all clubs:

We look  forward to a most enjoyable day.