Trials for the 2015 WA State Schoolboys Under 12s Team (Year 6 and Year 7) will take place during 1st term and the April School holidays. Players turning 12 years of age in 2015 are eligible to nominate.

This year’s WA state schoolboys team will be travelling to Geelong in Victoria from July 17th – 26th. The trial dates can be found on the School Sport WA website with trials being held in Karrinyup, Herne Hill and Mandurah.

In order to nominate for the trials please go to the School Sport WA website – locate the ‘Interstate’ at the top of the page.

Please let your Booragoon Bulldogs Coach and/or Committee rep know you are nominating.

If you have any queries please contact the School Sport WA office or:

Our very own East Fremantle District Junior Coach of the Year, Graeme “Fitzy” Fitzgerald, spent this weekend in Melbourne with the best Football coaches from all over Australia at the AFL National Coaching Conference.  Fitzy received this trip as part of his 2014 Coaching award.

Apart from a swanky dinner with Australia’s best coaching talent, there were presentations from AFL luminaries including David Parkin, Alistair Clarkson, and Stan Alves. 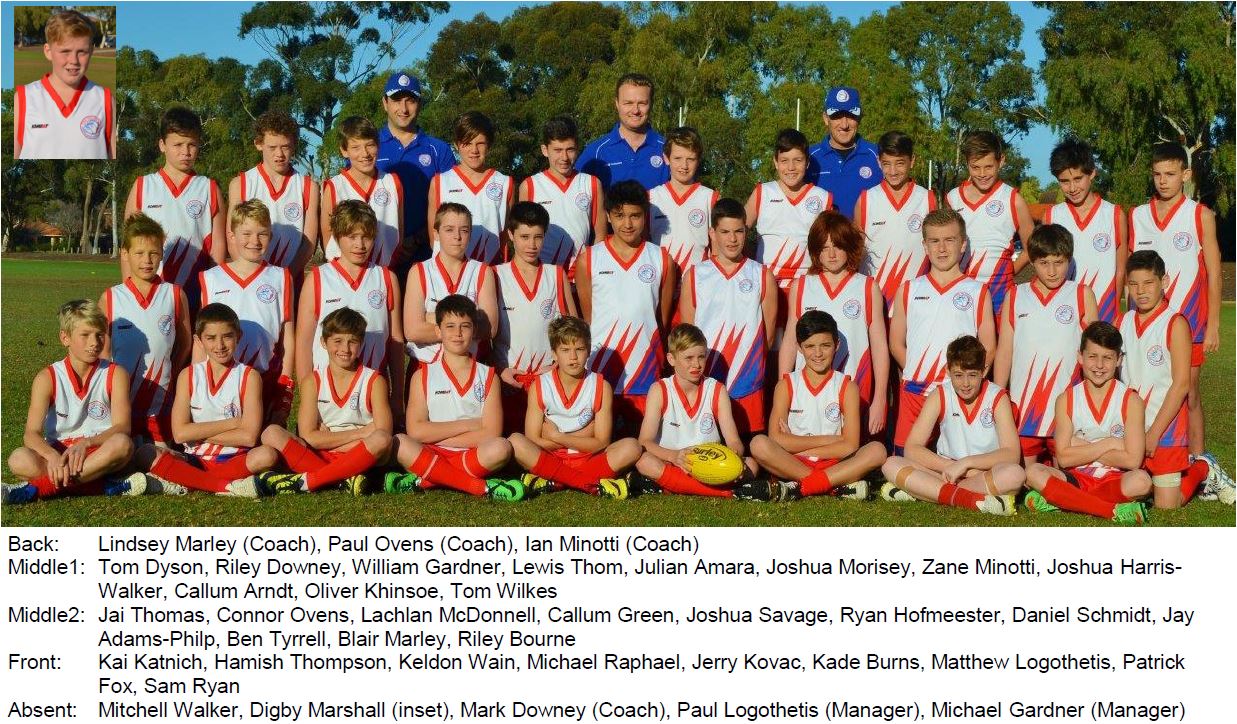 Our Booragoon Year 7s fought valiantly to the end, but were defeated in the Grand Final by Applecross. The final score was:

Congratulations to Ian Minotti and his team on making the Grand Final, the parents supporting the team, and again most importantly, to the Year 7 boys having an outstanding first season in a finals system competition.

Minno has notified the club that after many years of coaching, he has decided to take a step back and let the boys hear the message from another dad. He also wants to spend more time watching his son play. This is a great opportunity for another dad (or mum!) to get involved. Thanks Ian for many years of service to this playing group.

This year the Booragoon Junior Football Club have two teams playing in Grand Finals this Saturday 13th September – that “one day in September”.

Congratulations to our Year Eight Team coached by Tony Grosse and Graeme Fitzgerald, and our Year Seven team, coached by Ian Minotti and his coaching panel, on winning through to their Grand Finals. We wish our teams all the best on Saturday, enjoy the day.

Both Grand Finals will be played at the brand new Piara Waters Sports Complex, on the corner of Nicholson Rd and Wright Rd (20 minutes from Karoonda Park, travel south on Nicholson Road and turn right at Wright Rd and left at the first roundabout). This new facility will be in pristine condition for both games. The Year 7 Grand Final commences at 11am and is immediately followed by the Year 8 Grand Final at 1pm.

Our players need the support of all club members. Please make every effort to come along and barrack for both teams in their quest for premiership glory.

As stated in my preseason newsletter we had a number of key focus areas for the season. First and foremost we wanted the boys to continue to develop their basic skills. In particular we wanted the boys to work hard on those skills that they still found challenging. We also had a focus on the further development of game skills and improving the style of footy that we wanted to play. Finally, and very importantly, we aimed to have every one of the players thoroughly enjoy their football.

I am sure that everyone will agree that the boys have enjoyed another very successful season. In my view there are a number of highlights that have contributed to this success. I believe that we all witnessed a marked improvement in the boys’ football in the second half of the season. The boys all seemed to step up a gear. They played with greater intensity, gave 100% for four quarters and were prepared to go in hard to get the ball and to look after their team mates. We also saw the development of a greater sense of team in this part of the season. The boys wanted to work hard for each other, were prepared to share the ball and at times demonstrated some really unselfish play. I gained great pleasure in watching the boys encourage each other and gather around someone who had done something special.

At the beginning of the season we were short of players and it was great to have a number of new faces join us throughout the season. The new guys slotted into the side really quickly and all made a contribution to the team’s success. I was extremely impressed with the manner in which the returning players welcomed the new players into the team. The boys showed a great deal of maturity and character.

Also very pleasing to observe this season was the further development of the boys’ individual skills, the team’s game skills and an overall improvement in our style of play. After each game I would reflect on our strengths and also our areas for improvement. The areas for improvement would more often than not form the focus of our next training session. Throughout the season it was very pleasing to see the things that we had been working so hard on at training starting to feature in the games. Whilst on the subject of training I would like to thank the boys for their fantastic attendance at training throughout the season. We had most boys with us every Thursday and it certainly helped to create that sense of team and to further develop the game skills and strategies.

I have a lot of people to thank for their fantastic contribution to season 2011. First I would like to say a huge thank you to my Assistant Coach Rob Liebeck. Rob’s support and advice, particularly at the beginning of the season, was invaluable and his willingness to get in and do whatever was required to make sure the game went ahead was admirable.

My sincere thanks also to our fantastic Team Manager Les Chidgzey. Having been a Team Manager in the past myself, I know firsthand that it is not the most glamorous job. However, once again, Les has done an outstanding job of making it all happen behind the scenes and always with a smile on his face.

A huge thank you also goes to all of the parents, family members and friends that have supported our wonderful team this season. Without your support it simply doesn’t happen and I know that the boys love having you on the sidelines cheering them on.

On a personal note I would like to thank all of the parents for their support and encouragement during my first year of coaching.

I have saved my biggest thank you for the real stars of the show…the players. Boys, you really are a terrific bunch of kids. You should all be very proud of what you have achieved this season and also of the way in which you have conducted yourselves both on and off the field. It has been a pleasure to work with such an enthusiastic, respectful and fun group. Enjoy your off season and I really hope that you will all be back to represent the Mighty Bulldogs once again in season 2012.