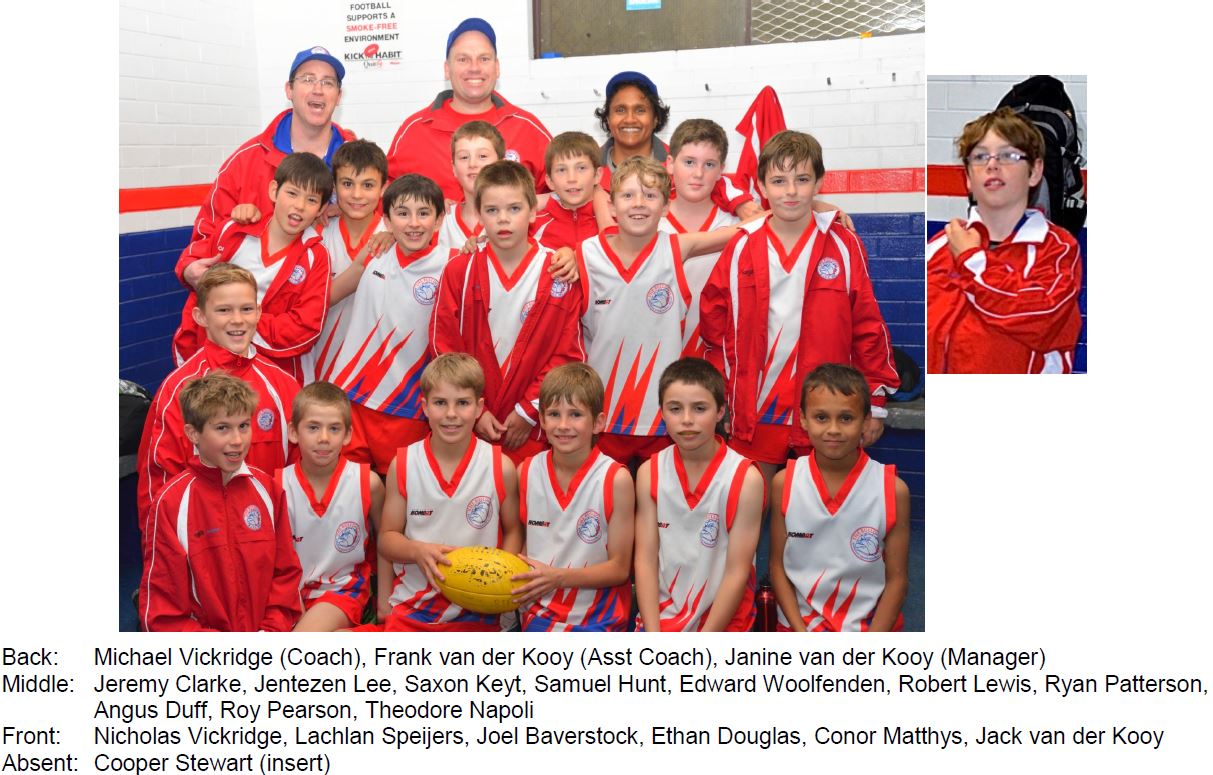 Coming in to the new season, the 2013 Year 4 Reds lost a number of players for various reasons. To ensure we could still field a team we drafted in a number of 2014 Year 4 s who were either part of the Mount Pleasant Baptist Church Auskick program in 2013 or who were keen to play Friday nights. Once again, the Year 5 Reds played all their games at Karoonda Oval on a Friday night. This is great for the players who are given an opportunity to play where they may not have otherwise been able to play on Sunday mornings and also great for the club to be able to have a third Year 5 team. It does, however, present a challenge for parents and volunteers, who are required to set up and pack up the grounds, staff the canteen and be responsible for Goal Umpiring, Timekeeping and First Aid every single week. The parents of the Year 5 Reds team should be commended for their willingness to support the team and the club in these activities.

We had a new Team Manager this year in Janine van der Kooy who did a fantastic job in keeping parents informed and updated, together with ensuring the paperwork always got completed, the referees paid and the volunteers organised. Frank van der Kooy also stepped up into an Assistant Coach role this year which was really helpful at both training and at games to assist in all of the player s development, but also helpful in managing a group of 17 ten year old boys.

Once again it took some time for the team to gel together as they had not played as a team before. Even when the team started to work toger, we often got off to a slow start. We were also set back by the loss of 3 players, Robert Lewis, Lachlan Speijers and Cooper Stewart, throughout the season for long stretches due to broken bones. However our thanks must go to the Year 5 Whites team, especially Heath Schmidt, who helped us out when we were short of players due to injuries, sickness and holidays.

Thanks must go to Cas Pearson who was our First-Aid officer for most games and had her share of injuries to deal with. Thanks also to Thomas Vickridge who helped out in the canteen on most Friday nights.

The Year 4 boys who played with us this year (Ethan Douglas, Angus Duff, Jentezen Lee, Robert Lewis, Roy Pearson and Edward Woolfenden) must be congratulated for their efforts and their improving skills. Without mentioning every boy in the team, there were several who put their heads over the ball week in and week out and worked really hard in almost every single game. They should be commended for their performance and their commitment. Congratulations go to Joel Baverstock, Connor Matthys and Jeremy Clarke for their performance this year.

It has been another rewarding season and hopefully with improved skills and another year of maturity, 2015 will bring further opportunities and improvement for a great bunch of boys.