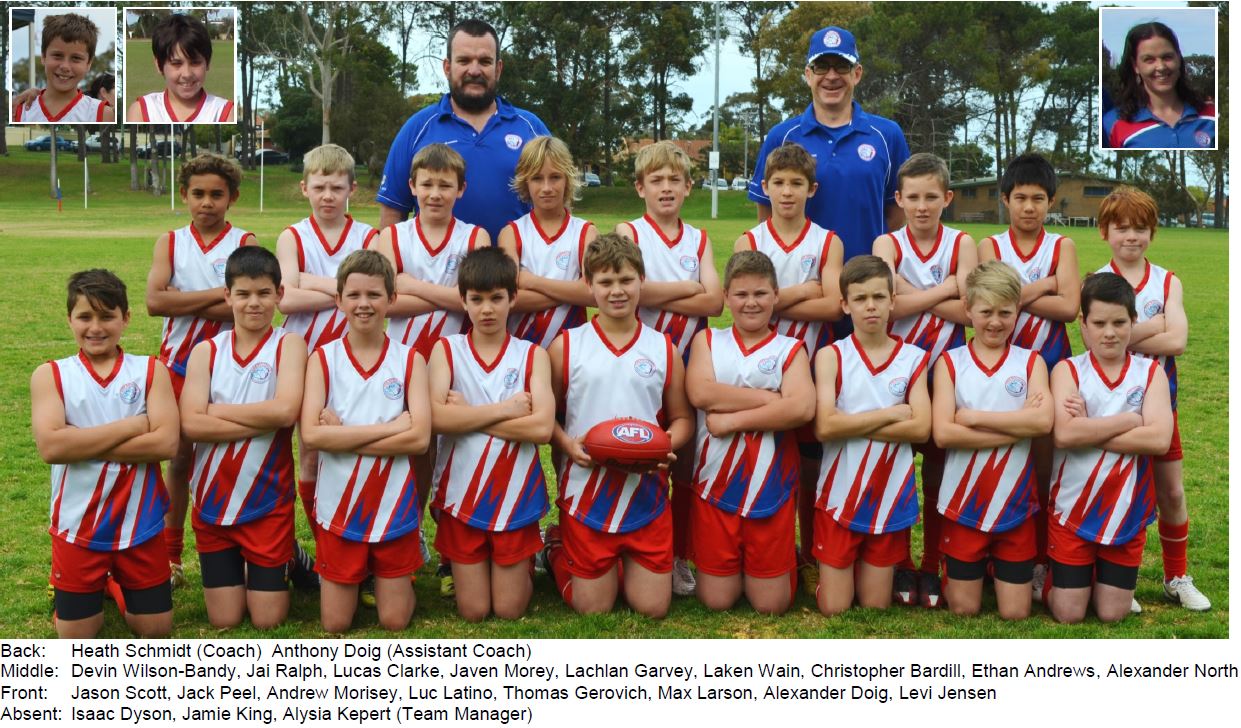 Anthony and I returned this year for another season to coach the mighty Year 5 whites. We embarked (woof!) on an early start to the preseason and the young Doggies were very happy to get off the couch and down to Karoonda to have a run and kick the footy.

Before training even commenced, Assistant Coach Doig and I decided to go on a preseason recruiting campaign. It was wildly successful, with five outstanding young pups welcomed to the Whites kennel. Four new Bulldogs Chris, Jai, Lachlan and Max, with Laken transferring from the Reds. Along with 15 boys returning, this brought our team to 20 enthusiastic young players ready to take on Season 2014.

The step up from year 4 to 5 was hard at first, but the boys soon realised (after a bit of early tough love and a few good old fashioned bakes!!) what was required of them, and quickly took on board what they needed to do. Their endeavour saw great development in our focus areas of moving the ball on quickly, making and honouring leads, finding space or manning up, and all importantly starting to learn the difference. The amount of times our fullbacks remained in the goal square while the opposition flooded the midfield and were able to stop goals on the line was great to see. It was exciting to see a desperate chase, as an opposition player sped away, seemingly unstoppable, before a Bulldog brought them down with a ferocious tackle. The boys found out that if they apply enough pressure, and never give up a chase, they were usually rewarded with the ball. Another pleasing development was the realisation that it takes more than one player to kick a goal the number of coast-to-coast goals were a prime example of a whole team working together to get a score on the board. At such times hearing the cheers from our proud parents on the sidelines was fantastic.

It was good to see that we had more positive than negative draws this season, with only a couple of disappointments all part of the experience, with the boys learning to be humble in victory and gracious in defeat. As the season progressed, the skills, the voracity, the attack on the ball, working to find space and create opportunities all started to gel across the team. By the end of the season, the boy s teamwork, kicking, marking, handballing, and tackling were awesome to watch albeit often scary for their opponents!

The Year Five carnival demonstrated just how far we had come this season a valiant effort by all the boys showed that when we played as a team and were all switched on we were unbeatable. The carnival proved to us that if everyone went hard, a team effort rather than individual effort won matches. We were very unlucky not to make the carnival Grand Final (missing out by one pesky point!), despite a tough draw with 4 games and no breaks. No complaints from the boys just enthusiasm to keep playing. Just like the Dockers we showed we were ready to play anywhere, anyone, anytime no excuses!

Special thanks to Anthony our sensational Assistant Coach the true quite achiever who quite seriously takes on too many tasks to mention. Training, planning and running our bench and team rotations like a well-oiled machine; his exceptional organisational skills contributing so much, not just to our team but to the club as a whole.

Big thanks to Alysia, again taking on the often thankless task of Team Manager, and once again doing a fantastic job she made it all look easy! Their hard work and support throughout the season made my year as coach very enjoyable.

Our parents are second to none. Their loud, proud support of our team always fired the boys up to do their best. Their willingness to take on the game day jobs helped everything run smoothly. Many of our parents not only contributed to our team but were involved at a club level.

Last but not least, thanks as always to the coaches and players of the year 5 Reds and Blues, our great training mates all year. Our clashes in the year 5 Derbies give us a lot of hope for the future of our awesome club as the combined year 5 teams come up through the ranks in the years ahead.