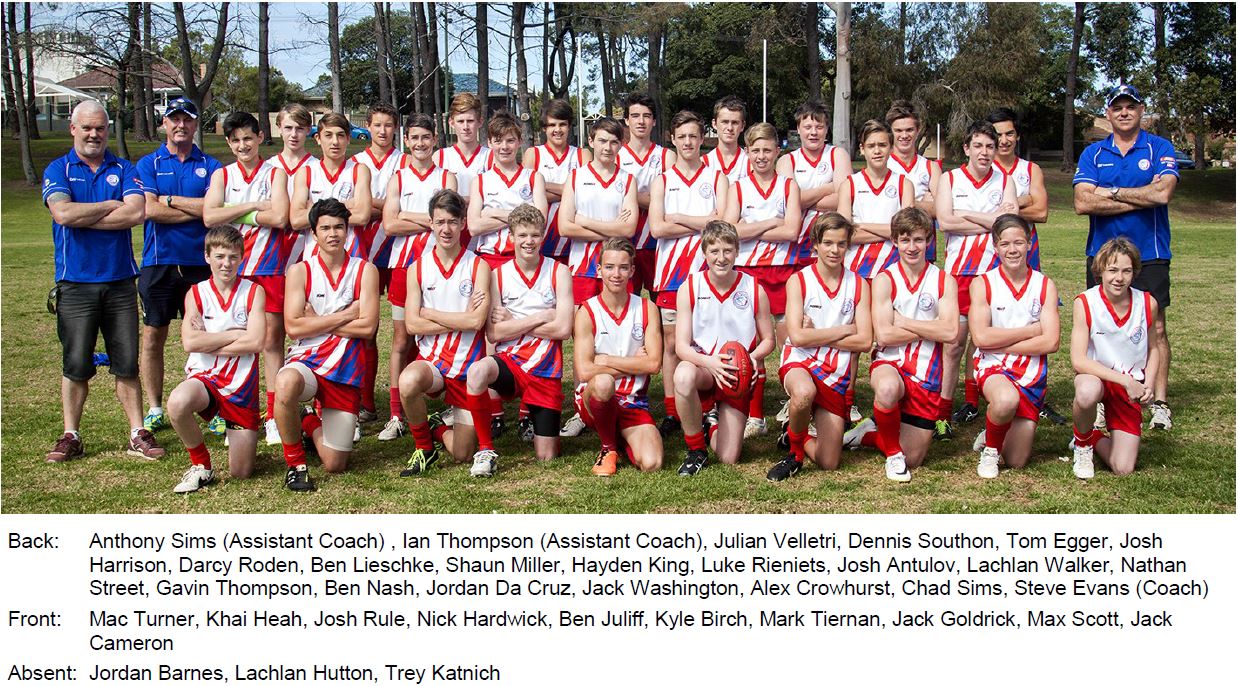 Yet again we come to the end of another great season. This year we amalgamated the Whites and the Blues into one side with the addition of some top recruits. At first this was a challenge but as the season progressed it was great to see the boys get behind each other and play as one unit.

Overall, looking at our win to lose ratio (15 games, 6 wins, 9 losses) I don t think it was a true reflection of this season. As the season went on the boys grew in confidence and teamwork and we had a few close games that could have gone either way. As it turned out we came in 4th and qualified for the finals series to play against a team that had previously beaten us by a considerable amount. The team played extremely well and we came within 11 points of winning the match.

Team leaders were appointed from the squad and set a great example on and off the field. Well done guys. We saw some great first year players for the club this year. Josh Antulov, Mac Turner, Luke Rieniets and Nick Hardwick. All the boys put in an exceptional effort and I hope to see you back again next year.

Although there were many memorable plays of the day, I d like to mention a few. Firstly, Dennis Southon: After being on the end of a highly contested mark on the boundary line, Dennis went back and kicked a check sided great goal with a kick we now know as The Southon. Secondly, Chad Sims, bursting out of the packs and slotting a nice goal from 55m in the finals, a much needed goal at the time. Thirdly, Hayden King, who had an outstanding season, provided a big run up the ground only to have the ball turned over in the forward line to the opposition and go back over his head. Hayden’s second effort to chase the player down was spectacular, and resulted in a free kick being rewarded.

Congrats to the players who hit their 50 game milestones this year Hayden King and Josh Antulov (50 overall games) and the first to make 100 games Darcy Roden.

All of these players were standouts this season, and are deserving of the votes, awards, and accolades received during the year. Parents and players, now is the time we should be trying to recruit more players to the club. If anyone has a friend who is keen, get them down early next year or even take advantage of signing up this year to receive a discount on fees.

I need to mention the great sponsors this year, all who donated time, products and funds. A big thanks to you all. The heroes this year are the team managers, Michelle Turner, Alysia Kepert and Heather Roden your organisational skills and negotiation efforts has made my job that much easier. Thanks again Ladies. Thanks also to Ian Thommo Thompson and Anthony Simo Sims for assisting with the coaching, It was a great team effort getting the boys to where we did. Thanks to all the parents that helped out on game day and to all the parents, family members and friends for the support and encouragement to the squad and myself, throughout the year. But most of all and as always, many thanks go to all my superstars for a great season. I had a great time coaching an amazing group of young men. Let s make sure we all get back next year to support the Mighty Booragoon Bulldogs.